Election season is approaching soon. Working people in Michigan will get the opportunity to hold elected leaders accountable and push them to support healthcare workers and other essential workers. We will stand together to make sure every working Michigander — whatever our race, income, or zip code — gets a say over the decisions that shape our lives at work, in our communities, and in our democracy.

The primary election is on August 2nd: it’s time to make a voting plan. We have the opportunity to elect candidates this year that will pass legislation and policies that support working families.

Join the Unions for All Worker summit on July 11. Together in a union, working people gain the collective power to win a better future for our communities. That’s why SEIU members, community leaders, and elected officials are coming together for a Unions For All Summit to demand that every job be a good union job. Let’s make sure Healthcare Michigan members turn out in force.

SEIU Healthcare Michigan supports the rights of women to choose. Last week, the Supreme Court overturned Roe vs. Wade, reversing 50 years of legal precedent. As a union powered by women and caregivers, we believe in the right of women to choose when it comes to abortions. The decision to have an abortion is an extremely complex and difficult choice and should be made between a woman and her medical provider. Politicians or lawyers with no medical background should never interfere with a women’s right to choose. Criminalizing abortion disproportionately affects the working class, particularly those who cannot afford to travel and pay hefty medical fees.

We are also reviewing the state budget which was passed last night. Governor Whitmer and the legislature agreed on a state budget last night. We will be providing updates and analysis as we dig deeper into it. 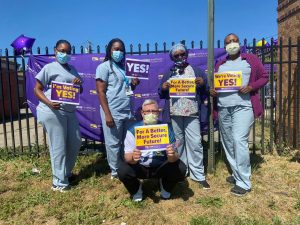 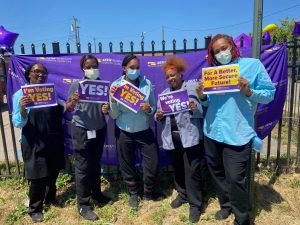 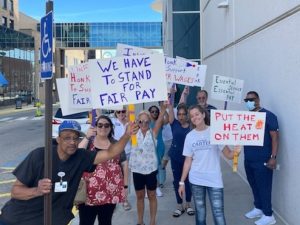 We are excited to see members using their voice and their vote as we head toward election season. We hope to see you at our Unions for All Rally and other political engagement events in the near future!