Standards board will bring together workers, employers, government to address worker concerns, define standards for quality jobs across industries

DETROIT, Mich. — Bearing signs that read, “Respect Workers—Meet Our Standards,” essential workers with SEIU Healthcare Michigan, SEIU Local 1 and the Fight for $15 and a Union rallied Wednesday to demand a meaningful voice on the job through the proposed Industry Standards Board Ordinance, introduced by City Council President Pro Tempore Mary Sheffield. Local workers across fast-food, nursing home, security and other frontline industries were joined by Deputy Mayor Conrad Mallett, Council Pro Tem Sheffield, Detroit Action and community allies united in their demand that the City Council give Detroit workers a stronger, more direct voice in their workplaces and communities.

“Detroit has long been shaped by forces of injustice, like racism and powerful corporations going unchecked,” downtown security officer Angela Williams said at the rally. “Corporations and developers continue to rake in the profits while regular Detroiters are forced to work two or three jobs just to make ends meet. With the Standards Board, we can change that. We can show that Detroit is a city that values essential workers, that values justice, dignity, and respect for all. We’re calling on the city council to pass the Standards Board ordinance. The more people in our city working in good union jobs, making a living wage, the better we’re all doing.”

The morning rally preceded a City Council hearing where eight workers from across industries testified about their experience working on the front lines of the COVID-19 pandemic and urged members to pass the ordinance, thereby giving them more influence over workplace standards and recommendations for solving issues like low wages, lack of protections and harassment on the job. National economic experts David Madland and Julia Wolfe also shared testimonies on the positive impact the policy will have for Detroit workers and the local economy. 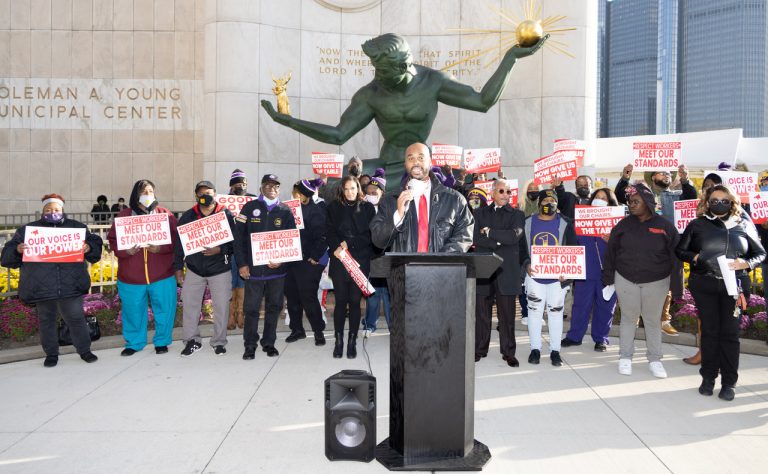 “It is an honor to stand here with Detroit workers today. We are gathered here today to rally and ensure that society also values your voice,” declared City Council President Pro Tem Mary Sheffield at the rally. “Essential workers risked their lives, they made enormous sacrifices to keep our city safe. Now, more than ever, it is important that we create opportunities for their voices to be heard and have their safety prioritized. Who knows better than the men and women that work day in, day out, serving and protecting us? They should be empowered and have a voice at the table. So the Industry Standards Board ordinance is the vehicle that’s going to help workers play a major role in achieving the workplace standards and wages they deserve. It gives workers a real voice to make recommendations about what standards should be in place to create a better workplace throughout this city.”

After more than 18 month of service and sacrifice to keep Michigan communities safe, clean, healthy and fed, frontline nursing home CNA and SEIU Healthcare Michigan member Mary McClendon joined fast-food, healthcare, janitorial and security services workers in speaking directly to Councilmembers, illustrating the difference a standards board could make in their industry.

“I’m here today on behalf of my fellow nursing home workers and essential workers and SEIU Healthcare Michigan to say that workers are counting on you to pass the Industry Standards Board ordinance,” McClendon testified. “We need a real voice on our jobs. I am tired of working without safe working conditions or the respect we deserve. I am tired of working from paycheck to paycheck trying to stay on top of the bills, and provide for my family. During COVID, we worked around the clock, risking our lives to provide essential care, without adequate staffing, PPE, or support. The pandemic has shone a light on the crisis for workers, our families, and the people we care for. And it is crystal clear that we need sweeping changes across the nursing home industry. And nursing home workers deserve a seat at the table.”

As written, the standards boards will bring together workers, government and employers to a table where everyone has a say in recommending the standards that should exist and outlining industry-wide measures to create healthier, safer workplaces that in turn lift up entire communities. City Council President Pro Tempore Mary Sheffield introduced the ordinance in October, which has the support of the Mayor’s office.

“We welcome the conversation with our stakeholders about removing barriers for Detroiters to return to work, providing safe and clean workplaces, and ensuring access to training opportunities and fair wages for workers,” said Detroit Deputy Mayor Conrad Mallet. “We believe a well-run advisory board could be one tool to accomplish these things.”

“Industry Standards Boards can help address problems that workers across the city face, including low wages, poor job quality, high poverty rates and significant racial inequities. [They] ensure workers have a powerful seat at the table, taking advantage of their expertise. The back and forth discussions about issues including compensation, scheduling and safety can often better address the full range of issues facing an industry […] and can help in closing gender and racial pay gaps,” noted Center for American Progress Senior Fellow and labor expert David Madland in his testimony.

Workers across industries including fast-food, healthcare, long-term care and beyond have organized together to demand a voice on the job and a stronger say in the conditions of their workplace. They protested and some even went on strike in the early days of the pandemic, demanding basic protections and livable wages as they continued to show up to work amid the dangers of Covid-19. For years, Detroit’s predominantly Black and brown essential workers have been calling attention to the long-standing issues that plague their industries including sexual harassment, wage theft and a lack of proper training. They’ve raised their voices to show how powerful corporations and systemic racism have denied essential workers the chance to thrive or to have a say in the decisions that impact them on the job and in their communities. And now, after nearly two years of sacrifice, essential workers refuse to return to the status quo.

The Industry Standards Board ordinance as introduced sets up a process by which workers can petition an industry-specific Board to try to address problems they’re witnessing in the workplace. It is the first measure for a major city in the COVID-19 era to put workers, employers and government on even footing to make joint recommendations on standards across an industry.

When a minimum of 150 workers within the same industry sign a petition for Board creation, the City Council will have 45 days to act upon their recommendation. Once established, each Board will consist of nine members — three workers, three employers, a Mayoral Office representative, a City Council representative, and a member of the public — to convene during public board meetings and issue industry standard recommendations around wages, benefits, and working conditions for City Council consideration.

While single-industry standards board policies have seen success elsewhere, Detroit would break new ground with a policy that applies to all industries.

Detroit’s essential workers are flanked in spirit by a nation of workers who are unyielding in their demand for respect, protection, pay and a voice on the job. The ordinance is being introduced during a season of strength for working people in Detroit and across the nation. The City Council is considering the ordinance amid a major national surge of worker-driven power, as “Striketober” turns into “Strikesgiving.” Workers across sectors including entertainment, manufacturing, food service, healthcare and beyond have leaned into their collective power to raise demands, authorize strikes and win major concessions from employers.

And in California, workers with the Fight for $15 and a Union have been dogged in advocating for AB257, a bill that would address long-standing issues in the fast-food industry by creating a statewide Fast-Food Sector Council which would include worker, government and industry representatives to set minimum health, safety and employment standards across the California fast-food industry.

SEIU Michigan represents nearly 30,000 workers across the state in the healthcare industry, the public sector and in property services. Our members provide essential services and care to our community. We believe in the power of joining together on the job to win higher wages and benefits while fighting for a more just society and an economy and democracy that works for all of us – Black, brown, white, Asian Pacific Islander, and Native – not just corporations and the wealthy. We believe that we cannot achieve economic justice without securing racial justice, and vice versa.